Guillermo Arriaga: What I’m talking about is not death, but life, a life that has an ending. 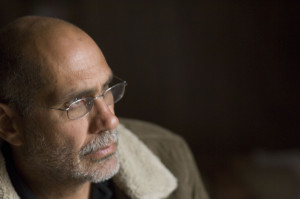 There was a lot of background noise in the press center. I was excited and anxious, thinking that my time is limited and I want to ask just the „right” questions. As I approached him, still thinking about the powerful impression he made the night before, he smiled and invited me to sit next to him.

Guillermo Arriaga is a Mexican writer, author of A sweet scent of death, Retorno 201 and The Guillotine Squad and scriptwriter of amazing movies like 21 Grams or Babel, nominated to BAFTA awards, an eclectic figure and a passionate hunter.

As I sit next to him, he tells me that he is amazed by the Romanian press and their questions, so I have a high standard to live up to, already. I reply, half-jokingly, that I hope I won’t be the one to disappoint him. Then I begin:

Alice Teodorescu: Let’s start with a tricky one first and we’ll see where it leads us… I was wondering if you could tell me how would you define mortality in relation to your art, as you tackle with a lot of huge subjects.
Guillermo Arriaga: I think I will put mortality as a very important part of life. But it’s not about mortality, it’s about life. What I’m talking about is not death, but life, a life that has an ending. So if we want to be people that embrace and enjoy life, we have to know that it finishes and that’s why I talk about mortality.

A.T.: I’ve felt that you have to embrace death, not fear it. Be aware of it. And it relates to what you were saying last night, to risk, to go out there and live.
G.A.:If you don’t risk, you begin to die…

A.T.: But talking about ending…as you finish the day, what is the final motivation for you to keep on doing what you are doing?
G.A.: What is the final motivation? That my life is going to end. I have several skulls in my working place, from different materials. I bought one of bronze in Brazil. They all remind me that I’m going to die and that my work is going to survive me. Writing and doing films is an affirmation of life, because I am reproducing moments that I would not be able to repeat anymore. But they will go beyond me.

A.T.: What about these moments? You said that you could only write and create from your own experiences. How do you know a moment will become part of your art?
G.A.: When it doesn’t go away. When it keeps knocking you and says I have to be told, I have to be told. There are stories that I have since I was 12 years old…

A.T.: They’re in the back of your mind…
G.A.: No, they completely come back to the front of my mind.

A.T.: But, what about memory? Is it important in what you create? I mean, the retelling of those moments…
G.A.: What is important in history in general, is not what happened, really, but how you perceive it. If there’s a car accident right now, outside, and we are 20 people watching it, there will be 20 perceptions. And how everyone perceived it, that is what’s worth it, more than the memory. I’m going to tell you about William Faulkner. Faulkner wrote a lot about lynching, and murders, and incest… and his brother said I don’t understand my brother, we live so happily, yes, there was lynching, but not that much, yes, incest, but not that much, so why did my brother perceive it like that?… we grew up in a very happy environment, what are we talking about?

A.T.: Do you think that the culture that you grew up in heavily influenced you and if you grew up in another way, you would have been different?
G.A.: I was telling a colleague of yours that the best thing that could’ve happened to me was to have grown up in the street I grew up. That definitely takes my perception of life and it’s the best thing that could’ve happened to me. And, yes, it’s not only culture, it has to do with the life experiences you have. Hunting has completely defined who I am and has completely defined my literature.

A.T.: I was actually wondering when did you start hunting? How did it happen?
G.A.: I wanted to become a hunter when I was like 5 years old.

A.T.: So, you knew..
G.A.: I knew. It’s funny, because my father is not a hunter. But the 3 male sons, we started hunting at some point in our life. And the 3 of us are much related to animals. One of them became a veterinary and he’s an expert in cows, the other one raised wild animals (like tigers…) and me as a hunter.

A.T.: And they don’t like to be lived by life, probably…
Let me switch now to the creative part of life, as you said that you could write anywhere if inspiration comes…
G.A.: It’s not about inspiration, it’s about sitting in front of your computer and trying to make it work. I had to adapt to write in many environments. But for me, the perfect environment is at night, in my studio, where I’m not disturbed, where I have all of my books… I, for example, use many photographs and paintings to write, sometimes I go and read some passages… So I, also, need my books. For me, my books, my films, are the blood of my work. If I lose my books… which I have bought all of my life, I have like 6000 books… (he pauses and gestures) That’s what feeds me.

A.T.: It’s really interesting that you say you use visuals for writing. After seeing the movies, I remember strong images and I remember it felt like visual poetry, if I may say so, and what remains with me, still, is a sense of very powerful emotions, like gripping my stomach. I was wondering if you are happy if people feel that way:
G.A.: I’m very happy that people will feel things. There are even people that hate you when seeing 21 grams or Babel. They say, I hate the person who wrote this and then they meet me and they change their point of view.

A.T.: Well, it kind of happened to me as well. Not hate, but I’m really empathic and movies like these follow me for months.
G.A.: But, that’s better. There’s something called „the parking lot movie”, when you reached your car, you forgot about the movie. I don’t want my movies to be like that. I prefer to be hated…

A.T.: But to linger…
G.A.: But to linger, exactly. Having a happy film where people will feel happy, but don’t remember it again, I don’t want that. I like to touch people, to change their perception and make their mind move.

A.T.: I can relate to that, but it’s difficult. I really admire you for wanting to tackle with this subjects that are considered taboo. And I’m really expecting to see Words with Gods.
G.A.: I hope you like it.

A.T.: I hope, as well. I think I will because religion is one of my favourite topics.
G.A.: I can tell you, my colleagues did a great job and I’m very, very happy with the film. For me, there are masterpieces in some of those segments. Absolutely… they put everything they had, they weren’t just making their job, they were doing something important.

A.T.: One last remark, I have a tattoo and I related to what you said that teenagers these days, because they’re in a protected environment, they need…
G.A.: Scars. They need scars.

A.T.: Yeah… It lingers already and I’m thinking that maybe I need to get out there more. (I laugh a bit)
G.A.: Yeah, because now youth is very protected. I don’t know about here, but in Mexico they are really protected now.

A.T.: No, in Romania as well. Maybe in the country side it’s not that much…
G.A.: But they have scars, they don’t have tattoos.

A.T.: True.
G.A.: So people in the countryside, they live the hard life and they have more and more physical scars, but people who come from big cities, they live in an apartment, they go to school, they use the public transport, nothing happens, they need scars, so they get a tattoo.

A.T.: I’ve never put it in that perspective, but you opened my eyes… so thank you very much!
G.A.: No, thank you! And you were up to the standards of the great Romanian press.
A.T.: Thank you 

We parted with a light hug and a huge smile on my face. The conclusion? I leave that up to you.